In the coming weeks, we’ll no longer allow blogs that contain sexually explicit or graphic nude images or video. We’ll still allow nudity presented in artistic, educational, documentary, or scientific contexts, or where there are other substantial benefits to the public from not taking action on the content.

The new policy will go into effect on the 23rd of March 2015. After this policy goes into effect, Google will restrict access to any blog identified as being in violation of our revised policy. No content will be deleted, but only blog authors and those with whom they have expressly shared the blog will be able to see the content we’ve made private.

Our records indicate that your account may be affected by this policy change. Please refrain from creating new content that would violate this policy. Also, we ask that you make any necessary changes to your existing blog to comply as soon as possible, so that you won’t experience any interruptions in service. END_OF_DOCUMENT_TOKEN_TO_BE_REPLACED

There have been a couple times that sex ended up being less pleasurable than painful.  Twice, I’ve almost had to make a hospital visit after fooling around.

When Cat and I were newlyweds we lived in a tiny cabin on the outskirts of our small home town.  It was also on the edge of the state graveyard, I’ve got a few ghost stories which I’ll probably write about some time.

Like most newlyweds, we were fucking constantly.  As a twenty year old, that was about as good as I thought life could be.  At that point, Cat had never had an orgasm but she was still eager in the bedroom.  We were working on her problems together but she didn’t mind them.  She as focused on perfecting her own technique and wanted to practice on me at every opportunity. END_OF_DOCUMENT_TOKEN_TO_BE_REPLACED

Why I’m not a slut… anymore

It often surprises people when I tell them that I don’t try and get laid when I’m between relationships.  Popular opinion would say that all men are constantly trying to get into a woman’s pants, any woman’s pants.  I can’t vouch for all men, but that certainly isn’t the case for me.  Anymore, at least.

Last year I was going through a dry spell, but worse than that I was really bored.

One night I get a message on one of the dating sites from an attractive older lady.  A lot older.  She was actually only a few years younger than my Mom.  I don’t mind an age gap but this was practically a generational gap.  Normally that would be an instant disqualification for me… but I was bored and she had a nice profile.  She seemed like a genuine person and was interested in me, big points in her favor.  We’ll call her Christine.

Christine was looking for a serious to long term relationship, or at least that’s what she had listed on her profile.  I was still recently divorced and not looking for anything long term at all.

But…  I was bored so I wrote her back.  She wanted to meet up for drinks that Friday night. END_OF_DOCUMENT_TOKEN_TO_BE_REPLACED

So, I decided to make my own…  Yeah, it wasn’t as easy as I thought it would be.  In fact, it turned into a bit of a process.  A long process that resulted in the following (I get carried away when I’m having fun):

Julie is an amazing woman.  I’ve written about her a few times now because she is just so much fun.  We’ve had phone sex, funny conversations, and she’s even influenced the many Art of Seduction posts I’ve done.  She’s just amazing.

The thing about Julie is that she keeps up with me.  That might sound odd, but we play well together, we have excellent banter.  It’s been such a long time since I’ve had anyone that was smart, got my humor, appreciated it, and throws it right back at me.  We live so far away from each other, all we have is the communication to go off of, but it amazes me that we click so well and we’ve never met. 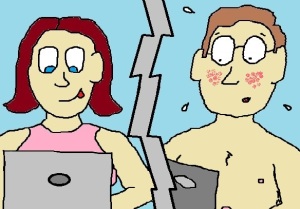 It’s not often that I’m seduced.  Usually I’m the conductor, I’ll play back and forth but I’m always very in control of myself.  Julie has managed to take that control away on a couple of occasions.  That’s quite a feat in and of itself. END_OF_DOCUMENT_TOKEN_TO_BE_REPLACED

Talk Clean to Me

When I’m bored I check the WordPress posts tagged with “sex”, I can usually find something amusing, entertaining, or offensive.

I recently found this blog, Sierra Parker, that seems to be dedicated to promoting male chastity to increase intimacy in relationships.

This sounded unique, which made it interesting, so I checked it out.

It looks like the author’s theory is that some men are so focused on the physical aspect of sex that they don’t experience any other kind of intimacy in a relationship.  So, if he becomes chaste he’ll have to focus on everything else instead of himself.  She encourages physical closeness, even being sexual with your partner, but discourages the male orgasm.

This is an interesting theory and might actually help some relationships.  I could see guys that are so focused on getting their rocks off they don’t learn to enjoy the other aspects of a good relationship.

But the problem was, reading her blog was getting me all hot under the collar.  Despite using more clinical terms like ejaculation, penis, clitoris, vagina, she was describing sex tips. END_OF_DOCUMENT_TOKEN_TO_BE_REPLACED

When I got divorced I decided it was time to institute a policy that I’d been dreaming about for years.

For various reasons I wasn’t able to start the policy immediately after the  divorce.  Now, I think it’s finally time to drop my drawers and enjoy the freedom of Naked Thursday.

So, here I sit, writing to all of you, and instead of being in my boxers like every other day I’m totally nude. 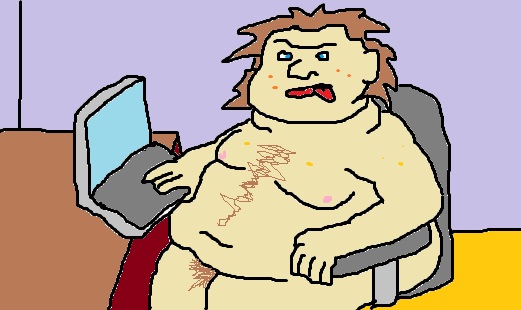 Talented Artists Representation of a Blogger on Naked Thursday END_OF_DOCUMENT_TOKEN_TO_BE_REPLACED

Recently, that feeling has totally changed.

I “met” this really awesome woman on an online writing workshop we were both doing.  We started exchanging emails, doing some chatting, and eventually were calling each other.  All of this was pretty flirty, we’d even sent each other some dirty pictures.

One night, there is a suggestion made that we have some fun on the phone.  With my history, with the opinion that phone sex is far less rewarding than real sex, I was slightly hesitant with this.  I mean, it was better than nothing, but not even close to as much fun as the real thing.

So, I call her.  We start off with some day-to-day chit chat and eventually work around to talking about sex.  What I would do if I were there.

This is when something interesting happens.  Through the phone I can hear her breath start to quicken.  I talk about slowly unbuttoning her shirt, kissing her all down her front as the cloth pulls away from her skin.  She lets out a small moan.  I talk about sliding off her pants, playing with her panties with my tongue.  Her breath gets even faster, her moans get louder and more frequent.  Slowly sliding off her panties, rubbing and kissing her legs.  I kiss her up and down her thighs, each time spending a little bit longer on her clit before moving to the other thigh. END_OF_DOCUMENT_TOKEN_TO_BE_REPLACED

“You know when you are working your man’s cock and craving that juicy load? You’re so hot that your knees are quivering and you are moaning just thinking about it?”

This is an excerpt from one of the blogs that I’ve followed over the years.  Additionally, those two sentences are the introduction to the post.  You click on the link and BAM there’s a cock in your face.  Figuratively anyway, a big written schlong right between your eyes.

I’ve mentioned that I have an aversion to language like that, I’ll avoid it whenever possible for multiple reasons.  I even got into a bit of an argument with the creator of e[lust] when I withdrew my interest in the project because I thought there was too much of the graphic and didn’t feel it fit with what I was writing, e[lust] submission (read the comments, Monique and I go back and forth a bit).

On personal level, I generally don’t enjoy it’s because it tends to be crass for crassness’ sake and lacks a sense of the artistic.  It reminds me of those young kids that run around saying swear words, grinning ear to ear because they’re being bad.