One of the Nights that I Almost Died

I’ve had a few events in my life that were pretty extraordinary.  And I don’t just mean in the bedroom.  The following is a true story of one of those moments that ended up having a really profound impact on the way I think and live my life.

A few years ago I became obsessed with Scuba Diving.  I got my certification and immediately started jumping into all of the craziest dives I could find.  It was thrilling to push the boundaries, to feel unsafe, and explore the world in a new and exciting way.

Well, sometimes you get a little more than you bargained for. 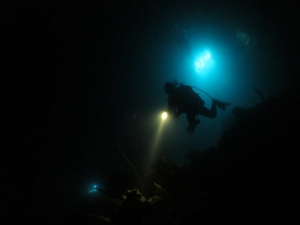 One of the dives I signed up for was a nighttime wreck dive.

We took a boat way, way out in the bay.  So far that we could barely see the lights from shore.  It was overcast that night, no visible stars, and the moon was covered by clouds.  The water was black, the sky was black, and town was only a dim glow on the horizon.

This was my first night dive, a more experienced diver friend was supposed to come with us but had to back out last minute.  We dove together all the time, he was my “buddy” so we’d watch out for each other.  Even though I was still with a group, his absence made this a lot more nerve wracking.

We jumped into the water and I quickly realized how black it really was.  I brought several lights but what’s so unnerving about it, and most people don’t realize, is if there isn’t anything for the light to hit the beam just disappears.  You’re light is on but it’s still total blackness in front of you.  Then a fish will swim through the light beam, you get some sense of three dimensions, and it’s gone again.

Going down to the wreck wasn’t too bad, there were five or six other divers.  We could see each other as we looked around, which gave some sense of depth and distance.  The current kept pulling at us so we grabbed the anchor line and descended as a group down to the wreck.

Being down at the wreck was awesome.  The divers spread out, so it looked like fire flies dancing around this massive ship on the bottom.  Each diver lit up a small piece of the main structure.  It was beautiful.

We were down around a hundred feet, which meant we burned through oxygen really quickly.  When my gauge started getting low I gave the guide the signal and started back up the anchor line.  Alone.

Each kick took me further and further away from the divers below.  As their light faded I started to get a strange, almost claustrophobic feeling.  The darkness pressing in on me from every angle.  When I stopped at 50 feet for decompression, I was totally isolated, surrounded by blackness in every direction.

It was sensory deprivation.  There was nothing.  Everything was black.  The only sound was the regulator purging and the heartbeat pounding in my ears.  My whole world was reduced to me and an anchor line, nothing else existed.  I had to stay at that stop for the next 15 minutes before I could continue the long trip to the surface.  And the current was even worse on the way up than it was on the way down.

I clung desperately to the anchor line as the powerful current kept trying to pull me into the blackness and the open ocean.  My hands immediately started to get tired.  It was a terrible waiting game, what would go first; my hands or the 15 minutes?   I just knew if my grip slipped I would disappear, never to be seen again.  If I slipped, I could imagine being tumbled about in the black current, no sense of up or down, oxygen running out, and my body being picked up by the ocean currents.  If my hands slipped I was gone.  It was terrifying.  Absolutely terrifying.

Clinging there, I would wait as long as I could before checking my dive computer, only to realize it had been a single minute since my last check.  There were no distractions, nothing to look at, just this inexorable current and my tiring hands.  My head was constantly moving, glancing every direction, but there was nothing except the two feet of anchor line illuminated by light and my gloves desperately trying to hang onto the algae covered rope.

My breath was racing, my mind going wild.  Every terrifying possibility seemed tangible, real, and right beside me.  Check my computer and it’s only been a minute, 9 more to go.  An eternity.  I was hyperventilating, my oxygen level dropping rapidly.  With nothing but my terrible imagination to pass the time, the hands on the watch slowed.  And kept slowing.  To nothing.  Yet the current still pulled on every inch of my body, trying so hard to drag me off into nothingness.

Just my mind, my hands, and the anchor line keeping me alive.

And then a strange thing happened.  I relaxed.  I kept my grip on the rope, but I relaxed every other muscle in my body.  A sense of calm came over me.

What am I so scared of?  Drowning?  Death?

There was a quote that I read when I was in High School:

“Death is nothing to us, for when we are, Death has not come, and when Death has come, we are not.”  – Epicurus

I had always liked that quote.  It made sense logically, but I didn’t really get it until I was clinging to that line, alone in the pitch black, 50 feet underwater.

Death is nothing to us.

We spend so much of our lives terrified of Death, avoiding death, and trying not to think about it.  That’s ridiculous.  Once you are born, death is inevitable.  There is absolutely nothing you can do about it.  Sooner or later, you will die.  We all will.

And all of the sudden, I just accepted it.  I’m going to die.  And I was ok with that.  I didn’t want to die, at least not yet, but death no longer frightened me.  If I was going to die, so be it.  It’s going to happen sooner or later anyway.

It felt like this mountain of fear had just been lifted off my shoulders.

The hands on the clock started to move again, getting up to their normal speed.  Minutes ticked by.  Even the current seemed less determined to drag me from safety.  I clung there, smiling in my mask and patiently waiting for the time to expire.

My decompression finished, I followed the line and made it back up to the boat, panting and grinning.  Ten minutes later the other divers joined me.  We had a snack and some drinks, and loaded up fresh tanks.  Then, care free, I jumped back in for the second dive of the night.

That moment totally changed my life.  I have absolutely no fear of death any more.  That doesn’t mean that I want to die, or take unnecessary risks, but the outcome of life is predetermined, so why worry about it?

Instead, I look at it like the last great mystery.  I really want to know what happens after this life.  But that doesn’t mean I’m in any rush to find out.